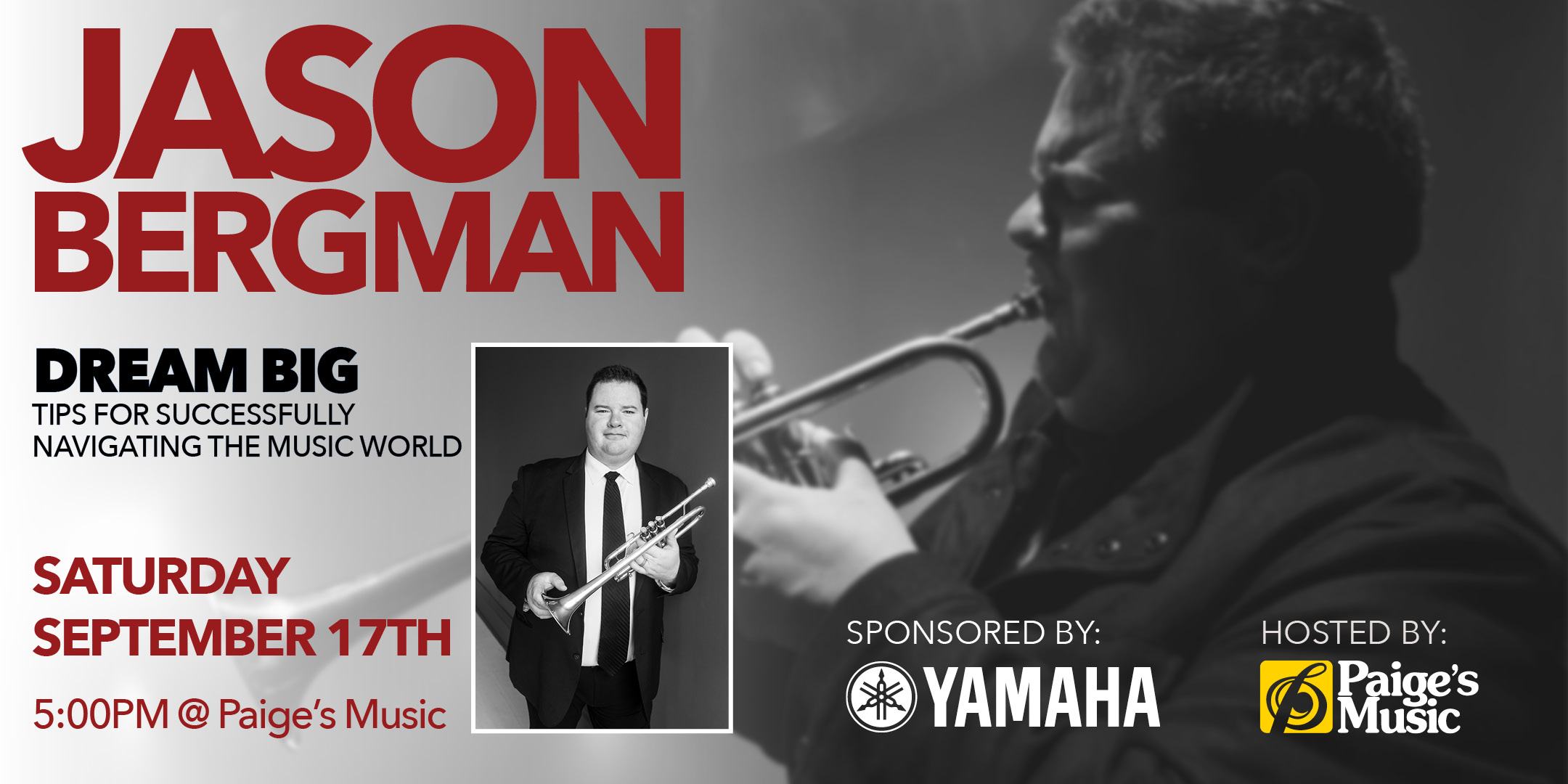 We are SO excited to host newly appointed Associate Professor of Trumpet at Jacobs School of Music (Indiana University) and President of the International Trumpet Guild, Dr. Jason Bergman for an in-store all instrument clinic DREAM BIG: Tips for Successfully Navigating the Music World. If you love music but aren’t sure what route to go to achieve your dreams, then this is the clinic for you.

Dr. Bergman will go through his journey as a musician, educator, music businessman, and share valuable advice for budding musicians. This will be my first event here at Paige’s Music and I could not be more excited to host Jason!

Dr. Bergman will also be available for mouthpiece and instrument testing throughout the day.  Limited appointments are available during store hours on September 17, 2022. Use the link below to schedule an appointment.

American trumpeter Jason Bergman was appointed Associate Professor of Music (Trumpet) at the Indiana University Jacobs School of Music in 2022.

He has performed throughout the United States, South America, Europe, and China. In 2008, Bergman was named Associate Principal Trumpet of the Santiago Philharmonic in Chile and more recently has been Principal Trumpet of the Mobile Symphony Orchestra and Mobile Opera. He has also performed with the Utah Symphony, Dallas Symphony, Dallas Opera, Fort Worth Symphony, and the Dallas Winds, including on their Grammy-nominated album featuring the music of John Williams. He has also been a member of the Orchestra at Temple Square where he performed weekly with the renowned Tabernacle Choir in Salt Lake City, Utah. Additionally, Bergman has performed in concert with the Canadian Brass, Rhythm & Brass and with conductor David Robertson at Carnegie Hall as part of the Weill Music Institute. He also performed as a fellow at the Music Academy of the West.

Bergman has given recitals and master classes at numerous institutions worldwide and has performed and presented clinics at conferences of the International Trumpet Guild, College Music Society, International Tuba and Euphonium Conference, Mississippi Bandmasters Association, Mississippi Music Teachers Association, Utah Music Educators Conference, and the Texas Music Educators Association Annual Convention. As a soloist, he has performed with the Royal Belgian Air Force Band, Garland Symphony Orchestra, Timpanogos Symphony, and the Beijing Central Conservatory of Music Wind Ensemble among many other groups.

In the United States, he has been a faculty member at the Idyllwild Chamber Fest, Blue Lake Fine Arts Camp and Grand Valley International Trumpet Seminar, and abroad at the Música nas Montanhas Festival and Festival de Música de Santa Catarina in Brazil and Semana de la Trompeta Peruana in Peru. A committed educator, Bergman previously served on the faculties of Brigham Young University, the University of North Texas, and the University of Southern Mississippi. He received the Class of ‘49 Young Scholar Award from Brigham Young University and the Nina Bell Suggs Endowed Professorship from the University of Southern Mississippi.

He currently serves as President of the International Trumpet Guild where he has also served as an elected member of the Board of Directors. He is a regular adjudicator with the National Trumpet Competition and was host of the 2018 National Trumpet Competition. He also served with Irish trumpet artist, David Collins, as co-host of the 2021 Ellsworth Smith International Trumpet Solo Competition in Dublin, Ireland. Committed to research, Dr. Bergman is a contributing author for the Grove Dictionary of American Music and served as editor of the Orchestra Section Profile in the International Trumpet Guild Journal. He has released three solo albums on the MSR Classics label, each that includes numerous world premiere recordings. Bergman, who earned a MM and DMA at the University of Michigan and a BM at Brigham Young University, is a Yamaha Artist and exclusively plays Yamaha trumpets.