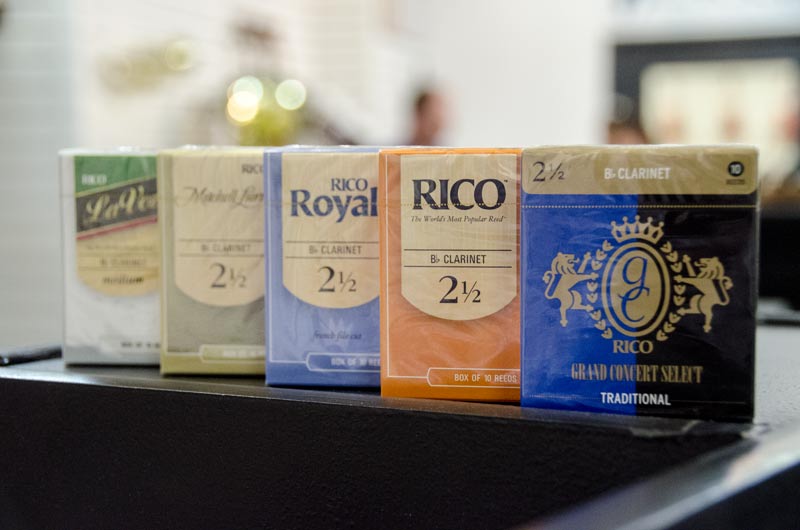 A few months ago we talked about how important it is for a reed player to have a good, well-made reed.  It is one of the most integral parts to their set-up to get the sound they are looking for.  At that time we discussed all of the different reed cuts that Vandoren makes.  This time we are going to look at the other major reed brand, Rico/D’addario.

D’addario purchased Rico in 2004 and in that time they have worked tirelessly to provide the reeds that players need to get their “voice”.   They have invested heavily in new technology to make the reeds better and more consistent than they ever have been before.  D’addario grows 100 percent of their own cane which gives them control of the materials throughout the entire process.  Below we have laid out the different models of Rico/D’addario reeds that we stock and the features of them.

Rico– This is the standard orange box that we have seen for years.  This reed is unfiled and has thinner profile and blank.  They are cut from the most flexible grade of cane.  They vibrate easy which make them a great reed for Jazz players and students that are just learning how to play.

Rico Royal– This reed combines the features of the standard Rico reed with a French File.  The filing gives it an increased response, especially in the lower register.  This is designed for an advancing player as it offers an even response across all of the registers.

Mitchell Lurie–  Mitchell Lurie reeds are unfiled and have a thinner tip for an ease of response.  This, with the addition of a thicker spine, make the reed more resistant with a warmer sound.  Available in filed (Mitchell Lurie Premium) as well.

Reserve Classic– A premium, filed reed with a thick blank that offers tonal depth.  It also features a longer vamp  for flexibility and a thicker tip for clear articulation.

La Voz– La Voz reeds are similar to the Rico cut.  It is unfiled and has a thinner profile and blank.  They have a deep powerful tone, due to the stronger spine, which gives greater resistance.

Grand Concert Select Traditional– This reed is filed and features a traditional tip with a thicker spine.  It has a quick response with a darker tone.