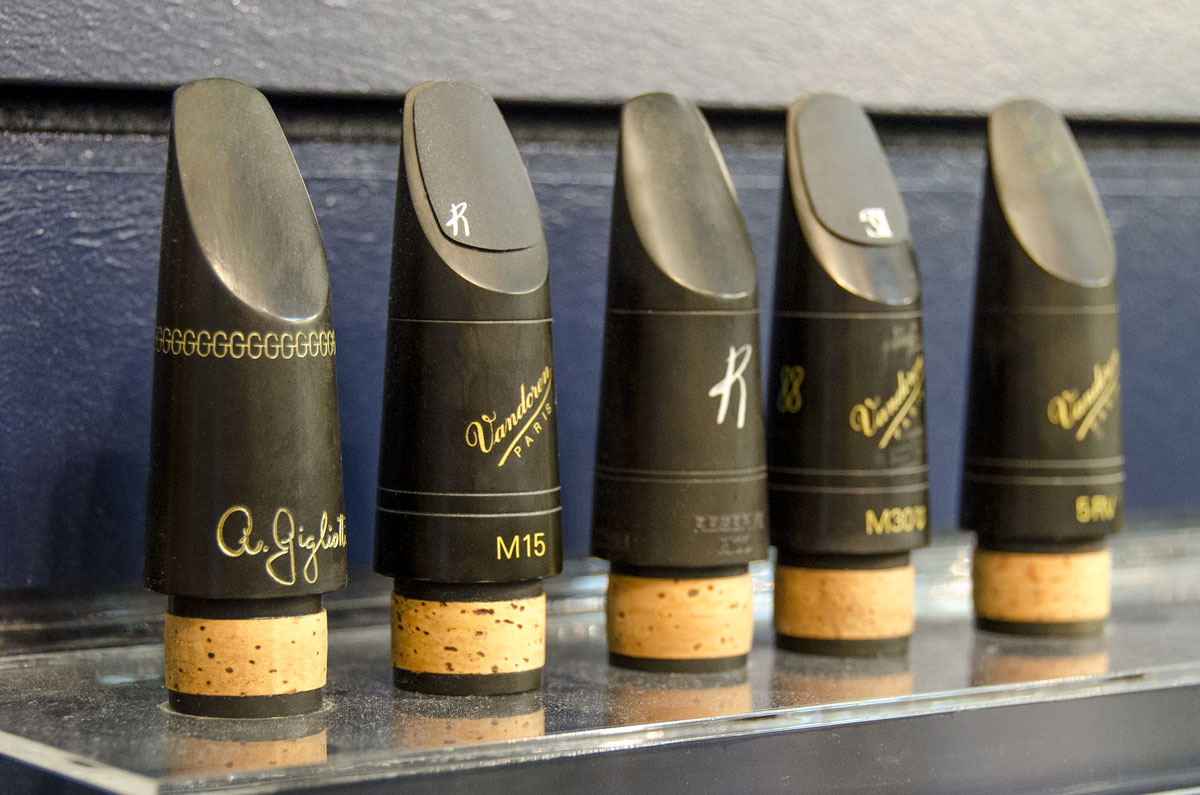 One of the greatest things about being a woodwind player is the numerous ways that we can personalize our instrument’s sound by changing reeds, mouthpieces, and ligatures.  The combinations are nearly endless and allow players to develop a set up that expresses their musical personality.  This having been said, the task of selecting a new mouthpiece can seem daunting so hopefully adding a little information about the differences in construction and resulting sound will make the process easier.

The basic material that is used in the construction of the mouthpiece varies from brand to brand but is generally divided into hard plastic or hard rubber.  In general, beginner mouthpieces are made of plastic and most of the advanced ones are hard rubber.  However, it is not always true that if a mouthpiece is hard rubber it is an advanced model or automatically better than a beginner mouthpiece. Many players notice a warmer sound from the hard rubber but the physical construction and dimensions of the various parts of the mouthpiece have a much greater effect on the sound produced than the materials it is made of.  In addition, the actual chemical composition of the rubber or plastic can vary greatly from one manufacturer to another so it is not wise to make assumptions about a mouthpiece’s sound based on the concept of “plastic versus rubber.”

The basic parts of a clarinet mouthpiece are shown in this illustration:

Although many factors influence the timbre and response of a mouthpiece, most players focus on the measurement of the tip opening which is distance of the space created by the curvature of the facing.  This opening has a large impact on the overall sound and responsiveness of the mouthpiece and the relationship between the strength of reed and tip opening is paramount.  A good general rule is that the bigger the opening at the tip of the mouthpiece, the softer the reed needs to be to create a good sound.    Other factors that influence the overall sound and playability are the facing, chamber, baffle, and throat.  The facing is the part of the mouthpiece where the reed is placed and creates a seal with the back part of the reed and allows the front of the reed to vibrate.  The length of the curve that creates the tip opening varies greatly and is an important part of how the mouthpiece responds.  The chamber is the section inside the front portion of the mouthpiece and directly affects the amount of air flow in the mouthpiece.  The baffle and the throat also change how the air flows into the instrument and how resistant the mouthpiece feels.  Although the general shape of the outside of mouthpieces is fairly standard, some manufacturers adjust the narrowness of the “beak” and this changes how the mouthpiece feels when it is played but has little effect on the overall sound.

All of the various parts of the construction of the mouthpiece are important to how it plays and the sounds.  Ultimately, every player is going to have a different opinion about what is ideal.  In addition, the reed and ligature combination used will greatly affect the overall sound and response so these factors are important to figuring out what works best for the particular player.  The best way to upgrade the mouthpiece that you are using is to try many of them and make a decision based on the characteristics you are looking for.  This can be a really fun day at the music store and allows the player to try many different mouthpieces without committing to the purchase until the decision is certain.